Projects funded by the National Institutes of Health

Neural correlates of recovery from aphasia after stroke

Aphasia is one of the most common and debilitating consequences of stroke. Aphasia is caused by damage to language regions of the brain, which are usually localized to the left hemisphere. Fortunately, most individuals with aphasia after a stroke experience some degree of recovery of language function over time. The pace of recovery is greatest in the first weeks and months, but clinically meaningful gains in language function are possible even years after stroke. Recovery from aphasia is thought to depend on neural plasticity, that is, functional reorganization of surviving brain regions such that they take on new or expanded roles in language processing. However, despite much research, the mechanisms that underlie this process of functional reorganization remain poorly understood. The overall goals of this project are to better characterize the neural correlates of recovery from aphasia after stroke, and to determine which patterns of functional reorganization are associated with more or less favorable language outcomes. To address major limitations of prior studies, we will use a range of innovative approaches. Adaptive language mapping paradigms will be used to identify language regions in a reliable and valid manner, while minimizing performance confounds. We will recruit large numbers of patients at two established sites, enabling rigorous statistical approaches such as linear mixed models and permutation testing. Advanced machine learning algorithms will allow us to disentangle complex relationships between structural damage, neurofunctional changes, and language outcomes. We will study two complementary cohorts of patients—acute and chronic—longitudinally using the same multimodal functional and structural MRI protocol, and the same language evaluations. In the acute cohort, we will investigate the dynamics of early recovery and functional reorganization, while in the chronic cohort, we will identify relationships between patterns of reorganization and language outcomes in a larger sample, and track the neural correlates of recovery in the chronic phase. Our first specific aim is to build predictive models of the trajectory of evolving aphasia profiles based on structural neuroimaging, including lesion location and extent, as well as multiple measures of the integrity of surviving tissue, and other clinical variables. Our second specific aim is to characterize the brain regions recruited for language processing in people with aphasia, and to identify patterns that are associated with more or less favorable outcomes. Critically, the key analyses will use the predictive models from Aim 1 to determine which patterns of functional reorganization result in better or worse outcomes relative to what would be expected on the basis of structural and clinical factors alone. Our third aim is to identify changes in functional activity associated with gains in language function over time, again in the context of the predictive models developed in Aim 1. A better understanding of the biological mechanisms that underlie recovery from aphasia will contribute to the development of neuromodulatory and therapeutic interventions, and will improve the clinical management of individuals with aphasia.

Neural correlates of recovery from aphasia after acute stroke 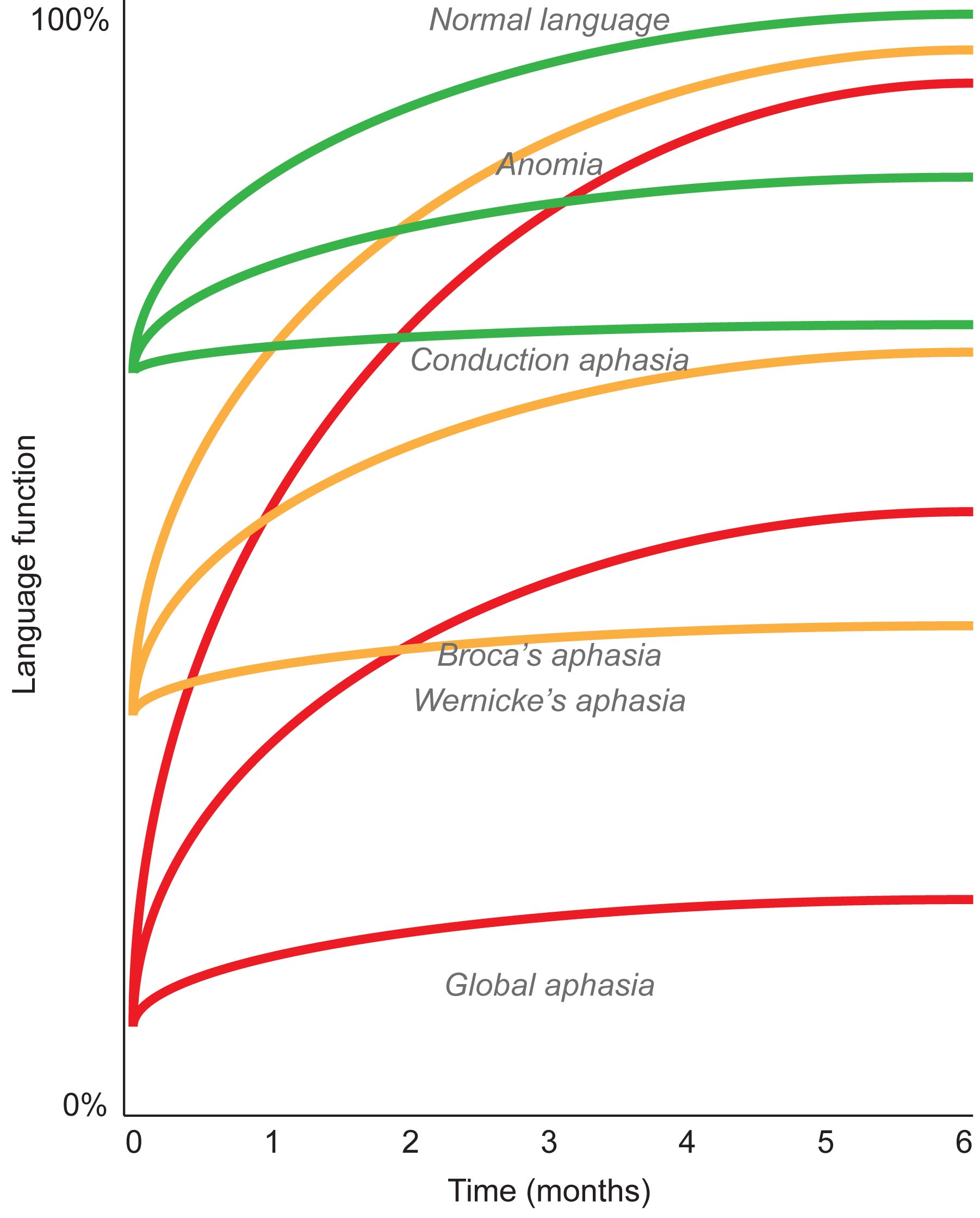 The overall goal of this project is to identify the neural correlates of recovery from aphasia during the first three months after acute stroke. Aphasia is one of the most common and debilitating consequences of strokes affecting the dominant hemisphere. In the acute and subacute stages, most patients experience some degree of recovery of language function. These first few months after brain damage occurs are critically important because the greatest behavioral gains take place during this time, even when patients do not receive treatment. However the extent of recovery is highly variable: some patients recover most or nearly all language function, while others make few gains and remain chronically aphasic. It is not well understood what neural mechanisms underlie recovery during this period, nor why some patients recover so much better than others. To address these questions, we propose to study individuals with aphasia due to acute left hemisphere stroke. Patients will be examined at four time points after stroke: 24-48 hours, 2 weeks, 1 month, and 3 months. At each time point, a comprehensive yet time-efficient language evaluation will be administered to quantify expressive and receptive language function, and a multimodal brain imaging protocol will be implemented that includes structural imaging (MRI), functional imaging (fMRI), perfusion imaging (arterial spin labeling, ASL) and diffusion tensor imaging (DTI). The proposed research has two specific aims. The first is to identify the neural changes that are associated with successful recovery from aphasia in the acute and subacute periods after a stroke. The second aim is to determine the initial imaging and behavioral variables that are most predictive of the extent of eventual recovery of language function. We hypothesize that the inclusion of fMRI, ASL and DTI in combination with comprehensive language assessments will provide a more complete characterization of the brain's changing state than standard clinical imaging and language measures, and will explain a greater proportion of the variance in recovery patterns. A better understanding of the neural correlates of successful recovery will improve the accuracy of prognoses so as to better plan medical treatments and behavioral interventions.

In many individuals with acquired aphasia, language function improves to some extent over time. This recovery process is thought to depend on neuroplasticity, that is, functional reorganization of brain regions involved in language processing. There is great interest in characterizing this reorganization process, and determining whether it can be facilitated by behavioral, neuromodulatory or pharmacological interventions. However, a major roadblock to this line of research is that it is challenging to identify language regions of the brain in individuals with aphasia. Tasks commonly used to engage language processing, such as narrative comprehension and picture naming, are limited in terms of validity (identification of language regions, and not other regions) and reliability (test-retest reproducibility). On the other hand, paradigms such as semantic decision that are effective in mapping language in people without aphasia (for instance, presurgical patients), are typically too challenging for people with aphasia. The overall goal of this study is to develop an adaptive semantic matching paradigm that can be successfully performed by people with aphasia, and that is valid and reliable in identifying language regions in individual patients. The key innovation is an adaptive staircase procedure whereby each individual is presented with stimuli that are challenging yet within their competence, so that language processing can be fully engaged in people with and without language disorders. The feasibility, validity and reliability of this adaptive semantic matching paradigm will be evaluated and compared to two commonly used paradigms: narrative comprehension and picture naming. It is hypothesized that the adaptive semantic matching paradigm will be more effective than these commonly used paradigms. The experimental control scripts, stimuli, and normative brain imaging data will be made freely available to other researchers. Moreover, this study will establish a formal framework for quantifying feasibility, validity and reliability of language mapping paradigms in this clinical research context, so that other potential approaches can be similarly evaluated.

Primary progressive aphasia (PPA) is a clinical syndrome in which degeneration of language regions in the dominant hemisphere is associated with progressive deficits in speech and/or language function. The overall goals of this project are to use functional magnetic resonance imaging (fMRI) to investigate neural changes underlying linguistic deficits in PPA, and to use this information to better discriminate patients with variants of PPA from each other and from normal aging. Recent studies have identified three clinical variants of PPA: progressive non-fluent aphasia (PNFA), semantic dementia (SD) and logopenic progressive aphasia (LPA). Each variant is associated with characteristic linguistic features, distinct patterns of brain atrophy, and different likelihoods of particular underlying pathogenic processes, making correct differential diagnosis highly relevant. We will recruit 48 patients with PPA (16 of each variant) and 24 normal controls over a three year period, and acquire fMRI data along with structural MRI, linguistic and cognitive measures. The fMRI paradigm consists of a syntactic processing task with seven conditions parametrically varying in syntactic complexity. The research will address two specific aims. The first is to identify the relationships between volume loss, changes in functional MRI activation, and linguistic deficits, in the different PPA variants. The second aim is to improve differential diagnosis of PPA variants using machine learning algorithms incorporating both structural and functional imaging measures.